Perhaps the most telling—and totally spoiler-free—thing that I can say about Ted Chiang’s Stories of Your Life and Others is that it affected my dreams. This is a book about ideas, about ‘what if?’s, and it is like a fizzy, caffeinated energy drink for the imagination. So, I was four stories into the collection of eight when, in my dreams, I was confronted with a choice to continue the dream I had been in or select another. I don’t remember how the choice was presented exactly—a menu screen or two paths in the wood or what—but I could see that my two possible dreams each had titles, which I could read. Not only that, but the title of the dream I chose to return to also had a subtitle in parentheses: a mathematical equation which I understood to be a perfect description of the dream. See? This is not a scenario lifted directly out of any of the stories, but (if you’ve not read it, trust me) Chiang’s influence here is clear. You must applaud a book that gets into the clockwork of your head and so thoroughly shakes things up.

Each reader will have their own, but for me the best stories were ‘Hell is the absence of God’, ‘Division by Zero’, and ‘Story of your life’—the story that was the basis for the film Arrival and the reason I sought out this book in the first place. Different ideas are explored through each of Chiang’s stories (he is not just riffing on one topic or idea the whole way through), and the settings range from the ancient city of Babylon to an alternate present wherein the earth is physically beset by the fury and grace of heaven—where angels thunder through the landscape like Godzilla!—to near and plausible futures. ‘Seventy-two letters’ is set in familiarly etiquette-driven and class-conscious Victorian times, but the society is powered by entirely alternate and whimsical technologies. I should have loved this story for its use of automata and the animating power of names, and the surprising appearance of steam-punk/costume drama in this collection, but no. Perhaps because it reflects the world Chiang imagines for this story, the story is populated by men—men of science and men of industry—while women are almost entirely absent, objects for breeding. I found this story, with its overbearing male-male-male-maleness, a tiresome read.

I did, however, appreciate Chiang’s brief ‘story notes’ at the end of the book. Each is like a small after-dinner drink, just enough to aid digestion and give you one last taste before letting the finished story go. Ted Chiang’s Stories of Your Life and Others is a haunting, spinning delight. I have recommended it to friends.

Go to this review on Goodreads.

About A. L. Kahler 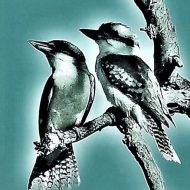